The Battle over Coffee 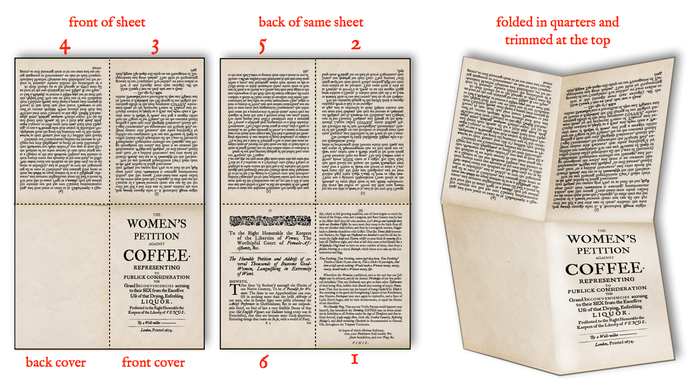 ​As seen above with Shakespeare's works, the Women's Petition Against Coffee was probably similarly printed as a quarto: In this case a single sheet printed on both sides for a total of 8 pages including the front and back covers.

The Adventures of Daniel Boone

The publication of Daniel Boone's Adventures in 1784 served to immortalize Boone the frontiersman as an American legend and a true folk hero. Published by John Filson on Boone's 50th birthday, the narrative describes in Boone's own words his exploits in the Kentucky wilderness from May, 1769 to October of 1782.
The Adventures of Col. Daniel Boone was subsequently published in The American Magazine in 1787 and again in a book by George Imlay in 1793. In his autobiographical narrative Boone tells of his passage through the Cumberland Gap, leading a party of settlers that cut the Wilderness Road in 1775. Boone's trailblazing efforts opened a door beyond the Alleghany Mountains, establishing a route used by thousands in the first westward migration.
Read the complete narrative at  earlyamerica.com

A History of Pirates

A Want-Ad for Crewing a Privateer

A privateer was a person or ship authorized by a government by letters of marque to attack foreign shipping during wartime. Privateering was a way of mobilizing armed ships and sailors without having to spend public money or commit naval officers. They were of great benefit to a smaller naval power or one facing an enemy dependent on trade: they disrupted commerce and pressured the enemy to deploy warships to protect merchant trade against commerce raiders. The cost was borne by investors hoping to profit from prize money earned from captured cargo and vessels. The proceeds would be distributed among the privateer's investors, officers and crew. Depending on whose side you were on, privateers were often considered pirates by those suffering at their hands.

What Every Young Man Needs to Know 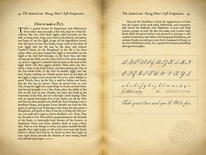 The American instructor, or, Young man's best companion contained a wealth of information vital to the aspiring young gentleman of the 18th century. Included in this volume was spelling, reading, writing, and “arithmetick,” how to qualify for a position in business, and instructions on how to develop your penmanship (a highly prized form of communication). Practical guidance on such subjects as measuring for carpentry, how to make dye for coloring clothing, how to make linen (used for paper), how to pickle and preserve (fresh food wasn’t always easy to come by), how to make different types of wine (usually safer to drink than water), and how to make your own plasters and medicines in case there wasn’t a doctor nearby. The pages here describe how to cut your own quill pen, pretty much the only writing instrument at the time.