Click on any image on this page for a larger version.

Seventeenth-century newsbooks differed from modern newspapers in both form and style, appearing as small pamphlets and ranging from four to forty pages in length. Although they generally focused on a single topic, they gave their readers detailed accounts of the same kinds of events that we read about in today's newspapers. The opening of the Long Parliament in November 1640, on the eve of the English Civil War, began a period of rapid change. The first newsbook containing domestic rather than foreign news began publication in November 1641. As the Civil War became more bitter, newsbooks were published to provide propaganda for each side. The desire for news was such during the Civil War and Commonwealth that during the 1640s and 1650s over 300 differently-titled newsbooks appeared, although most of them did not last. The newsbook page seen here recounts the beheading of Charles II following the English Civil War.

The First Newspaper in America

First published on April 24, 1704, The Boston News-Letter is regarded as the first continuously published newspaper in British North America. It was heavily subsidized by the British government, with a limited circulation. The News-Letter’s first editor was John Campbell, a bookseller and postmaster of Boston. During its early years it was filled primarily with news from London journals describing English politics and the details of European wars.

The Boston Gazette and Country Journal

The Boston Gazette was first published in Boston on December 21, 1719 and appeared weekly. The paper was started as a rival to The Boston News-Letter. In 1741 the Boston Gazette incorporated the New-England Weekly Journal and became the Boston-Gazette, or New-England Weekly Journal. Contributors included Samuel Adams, Paul Revere, and Phyllis Wheatley. The paper's masthead vignette, produced by Paul Revere, shows a seated Britannia with Liberty cap on staff, freeing a bird from a cage. Motto: "Containing the freshest Advices, Foreign and Domestic."

This reproduction of the coverage of the "Boston Massacre," March 12, 1770, uses exact text and a composite layout, including an image run after this issue as part of the notice of burial of those killed in the incident.

'Join, or Die,' one of the earliest published political cartoons, was created by Benjamin Franklin for his Pennsylvania Gazette on May 9, 1754. The original publication by the Gazette is the earliest known pictorial representation of colonial union produced by a British colonist in America. It is a woodcut showing a snake severed into eighths, with each segment labeled with the initials of a British American colony or region. New England was represented as one segment, rather than the four colonies it was at that time. In addition, Delaware and Georgia were omitted completely. Thus, it has 8 segments rather than 13, which would have represented the traditional 13 colonies. The cartoon appeared along with Franklin's editorial about the "disunited state" of the colonies, and helped make his point about the importance of colonial unity. The image was later used as the basis for the "Don't Tread on Me" slogan and symbol of colonial freedom during the American Revolutionary War.

This reproduction is accurate as to transcribed text. The layout, however, is mine. TB

How we officially established Thanksgiving as a holiday 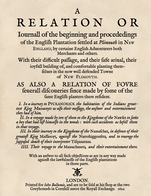 It is worth noting that as far back as 1690, the first newspaper in the colonies, Publick Occurrences, (which was suppressed immediately) noted that, "The Christianized Indians in some parts of Plimouth, have newly appointed a day of Thanksgiving to God for his Mercy in supplying their extreme and pinching Necessities under their late want of Corn, & for His giving them now a prospect of a very Comfortable Harvest. Their Example may be worth Mentioning." No mention of their contribution to this holiday appeared in Washington's proclamation.

​
An even earlier forebear of Thanksgiving was written in 1621 as a first-hand account by Edward Winslow, an original member of the Mayflower Pilgrims, in a letter to a friend in England. He later included it in a booklet detailing a year in the life of the Plymouth colony. The often quoted booklet was eventually lost in its original form until the early part of the 19th century when a copy resurfaced, including a description of a multi-day harvest celebration which took place in 1621 between the colonists and members of a neighboring Native American tribe. The tale's popularity was widely promoted as the "First Thanksgiving" eventually resulting in Abraham Lincoln's 1863 presidential proclamation appointing a national day of "Thanksgiving and Praise to our beneficent Father who dwelleth in the Heavens," to be celebrated on the last Thursday in November each year.

Newspapers in the Civil War

These are some of the many newspapers featured in the Newseum's digital classroom exhibit, "Marching for Women's Rights."
Visit the Newseum online at: http://www.newseum.org.
Back to top
Some of the images on this page, especially from the colonial era, are reproductions, designed to look as if they had just been printed. Although the texts are accurate, these examples are not intended to be taken as exact replicas. These reproductions utilize text transcribed, in most cases, from the originals. In a few instances, layouts are composites of two or more examples. These are noted as they appear. All layout and typeset on the reproductions © 2011 by Thomas H. Bivins.